Meet the Founder of Bitcoin Adam Back aka Satoshi Nakamoto!

i was suspicious about Satoshi Nakamoto when i have seen this post on bitcointalk.org

This user was asking about the latest satoshi build and if you check bitcoin.org you can only see the bitcoin 0.3.2. 1 and version 0.3.2.0  is missing so i thought why not to take a look!

I was able to download bitcoin 0.3.2.0   via virustotal because this file has been remove from everywhere.

Here is the link for you.

Bitcoin 0.3.19 is the latest build that was developed by Satoshi Nakamoto.

When you compile a source code file to an exe file your computer generates a unique footprint of your computer into the executable files which are so different for each pc.

For example, if you use C++ language and compile your code with VC++ 2010  the exe file it would be different if you compile the same C++ source code file with GCC.

This is how usually Anti Virus companies can block 100 malware with just one signature ( few bytes of codes  ) from a hacker machine even when hackers release a new version of the same malware over and over but AVs are able to catch them because they have created one unique footprint from hacker's computer.

In this case I just had to find Satoshi’s old project somewhere in the internet.

I have to download 100 files from all researchers all around the world but I was failing over and over to create a unique footprint.

I knew satoshi must be a very smart man to hide his identity from the world for such a long time but there is nothing I can’t solve.

I have watched lots of YouTube videos and read lots of comments one by one for days.

Until I watched this video, This video really helped me to have an overview of bitcoin and Adam’s back projects.

By knowing Adam’s Back website and his old projects my job was easy I just had to check the projects before 2009 and check if the footprint of his project are matched with Bitcoin.

I wanted to thank you https://archive.org/ for their great job of archiving the internet. I was able to find sha256 of Adam's projects and Bitcoin 0.3.20 and compare them and here is how.

When you compile a file this is how the compiler works.

I have used PE Explorer to find a unique footprint from first release of bitcoin.

And now with having an old project of hash cash http://www.hashcash.org/ project done by adam back I just have to compare these two exe files so I can see if they are created by the same machine. 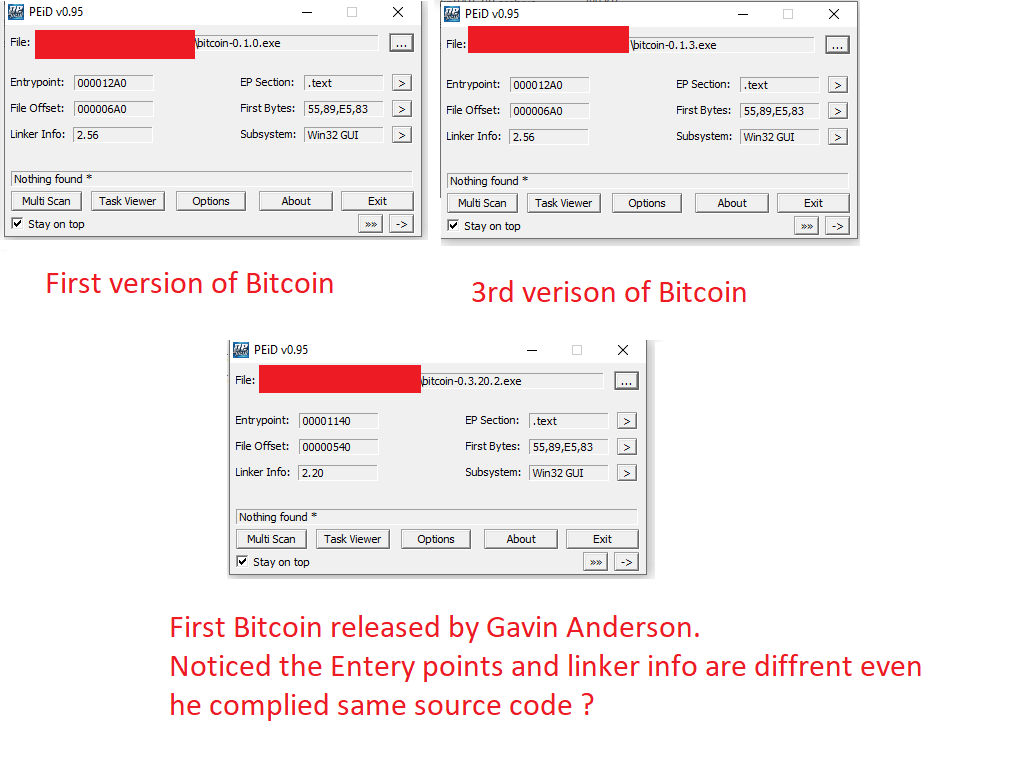 Just for your update 2.56 is GCC linker.

And here are Adam’s back hash case projects.

Yes Adam Back is Satoshi Nakamoto based on the fact and my research.

Also i recommenced to watch this video for more understanding about him.

Now we have found who coded the first release of bitcoin it's time to check Gavin Andersen's role. 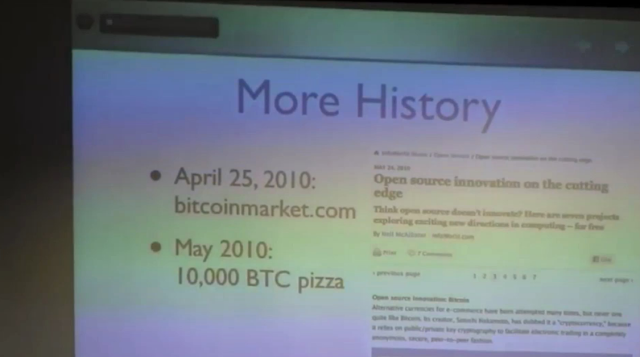 He claimed that he first heard about bitcoin on April 25, 2010 but my analysis from his first release shows that he was aware of bitcoin in 2009 and here is how.

As you can these files have been compiled with Gaving’s machine.

However, by checking the “uninstall.exe” file from the same project, you can see the project was compiled on 5/12/2009 so basically, he wasn’t telling us the truth.

That's why he removed  Bitcoin 0.3.2.0 from sourceforge and bitcoin.org because he know he messed up!

So Adam back is the founder of Bitcoin and Gavin Andersen was aware of Bitocin before April 25,2010 based on he first bitcoin release.

Also the original bitcoin has been compiled on 2008/8/08 and i'm still not sure why!

More about Adam Back

I was trying to post about my research on Bitcoin Forums on Reddit however they keep blocking me!

That must tell you something! 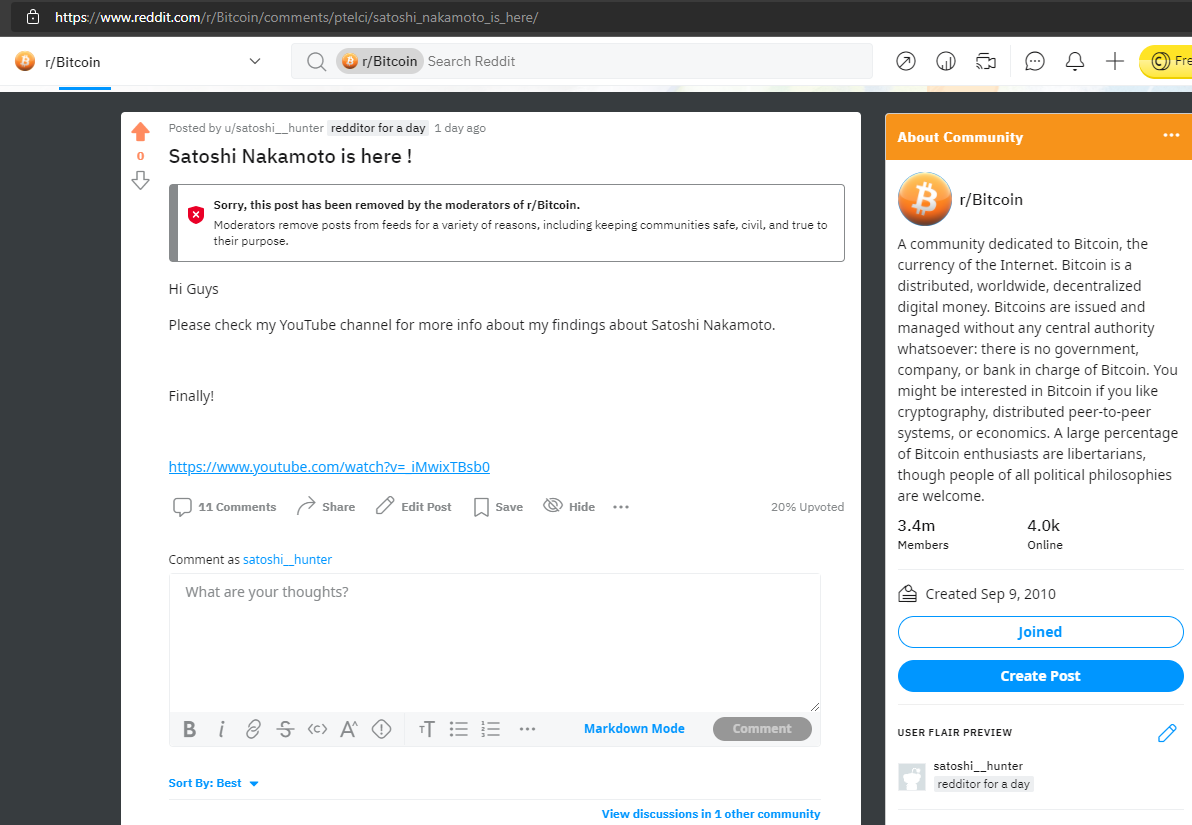 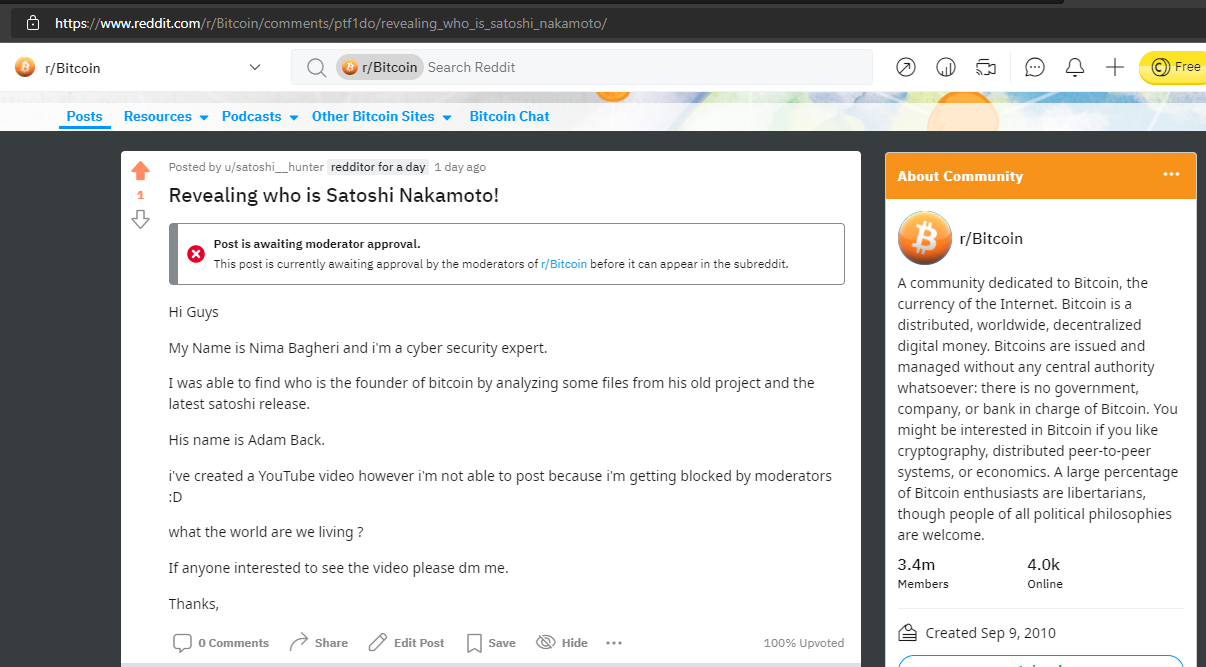 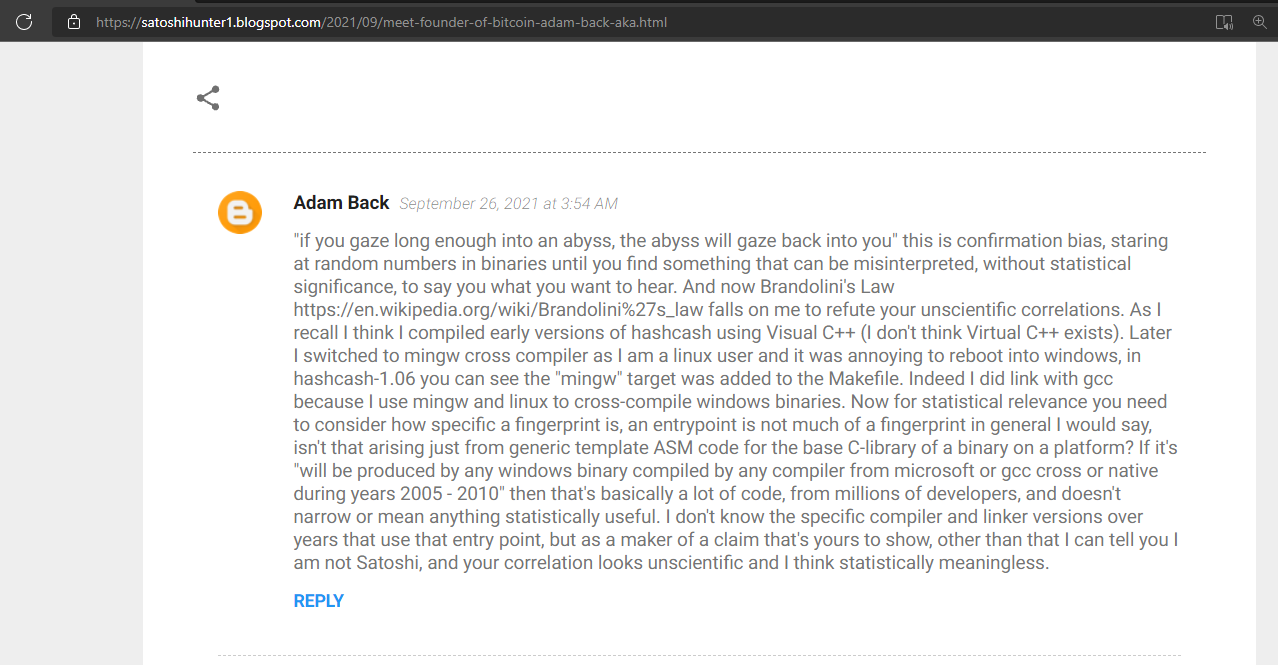 ::::"if you gaze long enough into an abyss, the abyss will gaze back into you"

Your time is gone !

::::this is confirmation bias,

If this was bias you won’t be writing here. There are 1000 posts over social media out there and you won’t answer to them. You did answer this one because you knew it’s valid also you wanted to keep your anonymity protected.

::::staring at random numbers in binaries until you find something that can be misinterpreted, without statistical significance, to say you what you want to hear.

::::Indeed I did link with gcc because I use mingw and linux to cross-compile windows binaries. Now for statistical relevance you need to consider how specific a fingerprint is, an entrypoint is not much of a fingerprint in general I would say, isn't that arising just from generic template ASM code for the base C-library of a binary on a platform?

These are not random numbers; these are PE-like Entry Point (EP), Original Entry Point (OEP) in packed PE executables that have been generated by compilers and linkers.

files in the test can be find here:

The Start of EP codes are in red.

Since you have used the same computer/setup for compiling these two projects ( hascash vs  libeay32.DLL ) the Compiler left its own signature there. I have highlighted them for you.

And here are the ASM versions for you.

Now for more public understanding, I will compare the hascash with the one libeay32.DLL that has been released by Gavin Andersen.

As you can see there are not close to each other at all.

Even tho the first version of bitcoin libeay32.DLL has the same source code as the one that has been released by Gavin.

Also, the function names are very similar in Hashcash and Bitcoin libraries. 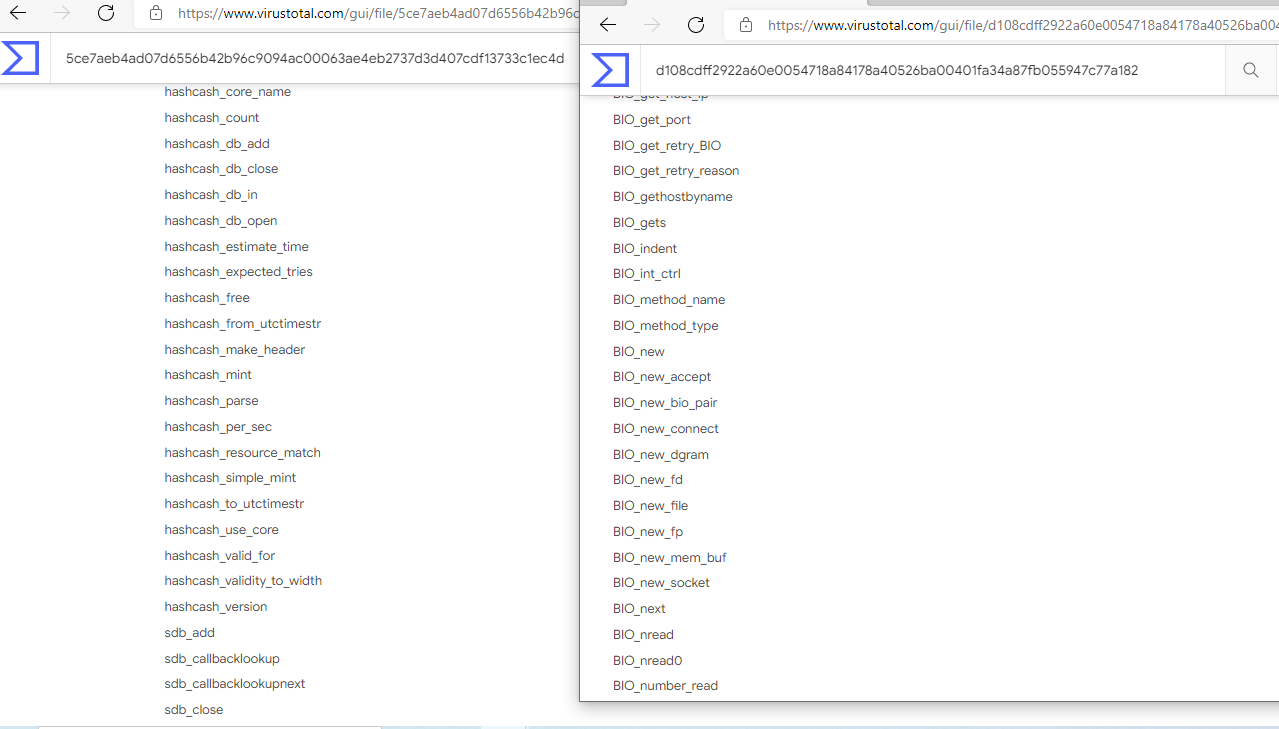 ::::As I recall I think I compiled early versions of hashcash using Visual C++ (I don't think Virtual C++ exists).

::::Later I switched to mingw cross compiler as I am a linux user and it was annoying to reboot into windows,

Yeah just like satoshi, when he stopped releasing a compiled version of bitcoin after bitcoin-0.1.5 ?

Adam I think you just confirmed that you’re in fact, Satoshi Nakamoto!

::::If it's "will be produced by any windows binary compiled by any compiler from microsoft or gcc cross or native during years 2005 - 2010" then that's basically a lot of code, from millions of developers, and doesn't narrow or mean anything statistically useful.

I have used the biggest clean DB in the world ( Virus Total ). 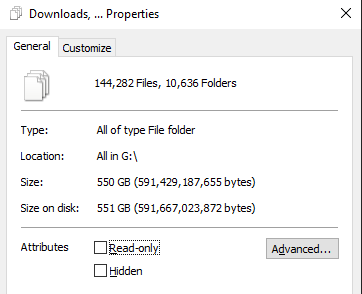 And I was able to compare exe files with the first bitcoin release.

and I was not able to find anything closer than Hashcash!

::::I don't know the specific compiler and linker versions over years that use that entry point, but as a maker of a claim that's yours to show.

If you were using a more popular compiler for bitcoin I wasn’t able to catch you but I assumed debugging in VC++ is a pain in the ass while you’re dealing with numbers !  I remember that !

Also changing the project form your release to Bitcoin Core saved Bitcoin because no one was able to compile your Codes via GCC :)

::::other than that I can tell you I am not Satoshi, and your correlation looks unscientific and I think statistically meaningless.

You and your best friend Max Keiser kept saying that it's better to be unknown.

You’re denying it because what Dan Pena predicted, it's going to zero!

Also because you’re worried about your investments!

But let me tell you something the bitcoin community is one of the most toxic and censored communities in the world.

also Your friend in the bitcoin core project (Jeff Garzik ) who sent this article to you is the one who blocked my post on bitcointalk.org.

It gets so interesting that I have not posted this article anywhere except on bitcointalk.org and bitcoin’s Reddit and you showed up out of nowhere and commented on my blog.

The case is closed and you’re in fact Satoshi Nakamoto!

And This is how i have solved the biggest mystery of  the Internet!

Popular posts from this blog

Why Adam Back not confirming he is the Founder of Bitcoin ? ( Part 2 )

December 13, 2021
Hi Guys  My Name is Nima Bagheri and i'm a cyber security expert  www.nima.tel I'm exposing Satoshi Nakamoto founder of Bitcoin (Dr Adam Back) and i need your help! Please support me by sharing my article on every social platform that you have and please sign this petition. Petition · Exposing Satoshi Nakamoto Founder of Bitcoin (Dr Adam Back) · Change.org Also, i have created a GoFundMe Page https://www.gofundme.com/f/exposing-satoshi-nakamoto-founder-of-bitcoin And 1000 NFTs if you're like to support what i'm doing. https://opensea.io/assets/matic/0x2953399124f0cbb46d2cbacd8a89cf0599974963/71535353955595505241402290590119578381014583513953661998198363681947968865256/ Bitcoin was started with good intentions, Low transaction costs, Decentralized currency, Low Inflation, and Extremely secure but Bitcoin is under the hands of one company called Blockstream and all r/Bitcoin moderators or Bitcointalk.org began censoring content and banning users they disagreed with, r/Bit
Read more